Probably better known for its real ale pubs, Sheffield’s cocktail scene is often overshadowed by neighbouring cities, including (and especially) Manchester. Having said that, this South Yorkshire city does cater for its cocktail lovers extremely well and here, in no particular order, is a list of my top five steel city favourites.

Located on Devonshire Street, The Old House  is situated on the slightly classier of the two drinking strips in the city (the other being West Street which runs parallel to Division/Devonshire Street). Given the name, the bar is rather aptly dressed with solid, dark wood furniture whilst pictures, clocks and trinkets adorn the walls and the mantelpieces. With such a homely feel, The Old House is great for whiling away a few hours in the early evening, especially as they operate table service. The cocktail menu covers a lot of the classics but with the odd twist as the team are experimenting with spirit infusion, cocktail bottling, barrel-aged drinks and smoked products. My personal favourite is their Negroni #3 – made with Aperol rather than Campari, this is a slightly less bitter version of the Italian classic aperitif. Go for their fabulous collection of gin, a classic Manhattan or a Whisky and Stout Flip. 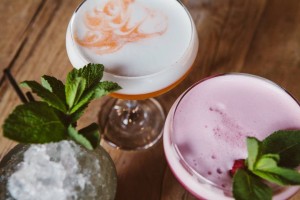 Just down the road from The Old House, The Great Gatsby is located on Division Street. It’s a relatively compact bar, but the ‘beard’ garden adds some vital square footage to the venue. Local artist, Nick Deakin, has played a heavy part in the décor of the Gatsby and his scrawls and simple, cartoon like images can be found throughout the bar – inside and out. Serving a Mexican inspired food menu, it’s not surprising that the Gatsby has a few Tequila based cocktails going on and the Paloma Hurricane (Tequila Blanco, Ting, lime and flaming lime) is great for anyone who likes their cocktails fresh and zesty! Having said this, the team are suitably equipped to get down to serious business and will knock out the odd classic including a Martini or a Sazerac. Go for the knowledgeable staff, the cool vibes and the specials board – where you might find a cheeky cocktail or two.

3) The Wick at Both Ends

Home to the likes of Varsity and Walkabout, West Street isn’t generally frequented by the true cocktail connoisseur, but The Wick at Both Ends is a true stand-out gem. Décor is eclectic with retro and vintage pieces dotted around and there’s a truly welcoming feel to the place – even on a busy Friday evening. The cocktail menu covers a nice range of the more approachable classics (such as Mojitos)  and tropical flavours abound in the Tiki menu. But the real interest lies in the Absinthe section where you’ll find the Wick’s answer to the Bloody Mary – the Corpse Reviver #2. Made up of gin, Cointreau, vermouth, citrus and absinthe it certainly has a real kick to it! Go for a break from the madness that is West Street, the funky wallpaper and the absinthe drip.

Bamboo Door is Sheffield’s first dedicated Tiki bar. Situated on Leopold Square, just off West Street, this bright and sunny bar serves drinks from a bamboo roofed hut and has the benefit of a large patio area on the popular Leopold Square. As should be expected, drinks are served up in fun (or gimmicky – depending on your approach) Tiki style tankards and there’s a decent selection to choose from. Rum is big on the agenda, so you’ll find cocktails such as Road to El Dorado, Mai Tai and Diamond Rum Fix available. Go for the Rum Club, the surprisingly good wine list and the challenge of ordering a She sells Seychelles Sour once you’ve had a few…

Head towards the legal sector of the city and you’ll find The Wig & Pen on Campo Lane. Regularly frequented by the after work crowd, The Wig & Pen is busy with crowds of solicitors, accountants and other local professionals. The venue is quite large with different sections catering for diners and/or drinkers; but, for the cocktail connoisseur, the best seats will be found at the high tables near the bar. Unless it’s summer, in which case you might want to sit out in the Georgian Paradise Square. Part of the Milestone group, the team behind The Wig & Pen are known to experiment with flavours on the plate, and this ethos will be found in the glass too. Some Like it Hot sees a classic combination of lime, ginger, chocolate and chilli, whilst the Beetroot Negroni sees gin, bitters and pickled beets join forces. A solid selection of classics will also keep you occupied. Go for the after work wind down, the historic Paradise Square setting and the experimental flavours.