The White Russian cocktail is a coffee flavoured cocktail that everyone, from the seasoned cocktail connoisseur to the beer guzzling jock, seems to enjoy. A simple cocktail of vodka, coffee liqueur and cream (or sometimes milk, or half & half) the White Russian cocktail was essentially a variation on the classic Black Russian, which is also a coffee flavoured cocktail, but without the cream, which first appeared in the late 1940s. Neither drink originated in Russia but was so named due to the Russian connection of its principal ingredient, vodka. According to the Oxford English Dictionary, the White Russia cocktail was first documented in the Oakland Tribune in November 1965. This is believed to be the first published instance of the drink. 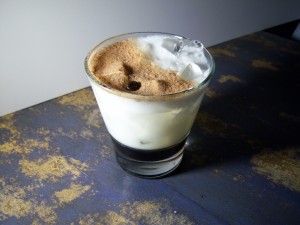 As mentioned earlier, the cream that is used as part of the simple cocktail recipe is sometimes replaced with milk or half & half. Either way, the taste of the resulting White Russian does not differ considerably plus the potency of the drink is still well masked in a “sea” of creamy, coffee smoothness. The coffee liqueur most often associated with the White Russian cocktail recipe is Kahlua, probably due to the fact that it is the most well-known coffee liqueur brand. As could be expected, several White Russian cocktail variations have popped up over the years, such as the Blind Russian, where Baileys Irish Cream replaces the cream in this decadent coffee flavoured cocktail, or the humorously titled Anna Kournikova, which replaces the cream with the much skimmed milk, to create a healthier coffee flavoured cocktail.