Vanilla cocktails often make popular dessert cocktails, as they can be quite sweet and vanilla is also the base flavour in many popular non-alcoholic cocktails. Cocktails with vanilla flavouring are still fairly uncommon but deserve more attention as vanilla has always been a very popular flavour –vanilla ice cream, for example, is still the most popular flavour of ice cream in the world.

Vanilla has recently popped up as a flavour of several spirits, with vanilla vodka now being available from major brands such as Smirnoff and Grey Goose. Vanilla vodka is increasingly used by cocktail bartenders throughout the UK, but for a simple mixed drink you can combine vanilla vodka with coke or, if you fancy an alcoholic drink that resembles Cream Soda, mix up vanilla vodka with ginger ale.

There are also a number of vanilla liqueurs available to buy, with some of the more popular options being Navan Natural Vanilla Liqueur and Kahlua French Vanilla, which can be a flavoursome addition to a cup of coffee.

There are three main types of vanilla grown throughout the world, but the most popular is Madagascar Vanilla, also known as Bourbon Vanilla, which is produced in Madagascar and neighbouring islands in the south western Indian Ocean and in Indonesia. After saffron, vanilla is now the most expensive spice in the world, due to the fact that growing the vanilla seeds pods is extremely labour intensive. 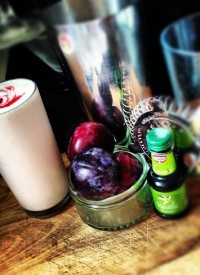 The award-winning Plum & Vanilla Fizz was created by Chris Green from Northumberland.

Root Beer is a carbonated, sweetened beverage originally made using the root of a sassafras plant as the primary flavour.