Hotel du Vin think quintessential British style. Elegant and unpretentious. Combine this with great spirit, wit, an unquestionable devotion to wine, and you have captured the essence of Hotel du Vin. Picture fourteen sensitively converted spaces, like a Georgian townhouse, a brewery, or a hospital, eclectically furnished in a timeless manner. Imagine a trademark bistro serving outstanding, locally sourced produce from our new Homegrown & Local menu, an outstanding cellar, Egyptian linen and monsoon showers for your room, a glorious Laroche tasting room for the wine-lover, a cigar shack in its gardens, and inspiring original art in its halls.

Set slightly back from the huge junction that serves as Bristol’s city centre, opposite the ‘See No Evil’ semi-permanent graffiti exhibition lining the walls of Nelson Street, this is, perhaps, not where one might expect to find an establishment as elegant as Hotel DuVin.

Past a statue of a man on a horse, the cobbled courtyard is laid out with garden furniture and a quietly tinkling fountain, with floor to ceiling windows allowing a view of the sweeping staircase inside.

Opening the door to the bar we were greeted by mouthwatering aromas from the restaurant, and by the time we pulled up our pews at the bar, and were asked by a waiter whether we were dining, I certainly wished I was. Luckily for me, as we were handed some massive, leather bound menus containing the cocktail and wine lists, we were also given complimentary olives and pistachios. As extensive as the menus were, they were clearly and intelligently laid out, with a wide range of drinks, including the somewhat disco ‘Last Word A DJ Saved My Life‘, their entry to last autumn’s Bristol Cocktail Week ‘Last Word‘ competition, and a genuinely original Mojito, made with 1930’s Bacardi (unfortunately ‘slightly’ out of my price range).

Despite being a bank holiday Monday (usually a very quiet evening for bars and restaurants) there was a fantastic atmosphere in the room as it gently buzzed with polite conversation.

Something about the feel of the place had inspired a desire for wine, so after singling one out that I felt might be to my taste, I asked the bartender to give me a run down of the flavours.  He described it very much as I hoped he would, and it tasted the same; a deliciously smooth Bordeaux.  There were two sizes offered, and I wasn’t really given a chance to specify which I preferred, but as they were very similar (not the 250ml bucket some places offer) it was only a small niggle.

For a drink geek such as myself one of the most amazing things about Hotel DuVin is the incredibly extensive back bar, containing (I believe) over 300 different premium spirits and liqueurs. Having recently discovered the joys of mezcal I was excited to spot their selection, and asked the bartender about them. He kindly brought a couple of bottles down for me to have a look at, told me about them, and even gave me a splash of a very interesting, and delicious, mezcal-agave liqueur to taste.

After finishing my very quaffable wine, I spotted the coffee machine perched on the backbar, and opted for an Espresso Martini. While the original recipe specifies vodka, I prefer mine to be made with rum. Luckily for me, so does the writer of the Hotel DuVin cocktail menu. The drink was beautifully made; fluffy and rich, with the perfect balance of sweet rum and bitter coffee. I was there as part of a birthday celebration, and the bartender appeared to be really enjoying going all out with the garnishes; rather than the traditional three-coffee-beans, my drink had the silhouette of a mint leaf sprayed on with edible gold. The birthday girl’s glass was garnished to within an inch of its life, making her feel very special and bringing a little tongue-in-cheek fun to an otherwise fairly formal environment.

While it seems a little unfair to criticise a bar on the lay-out of the building, I did feel a little self conscious having to go into the restaurant and squeeze past the waiter station to go to the bathroom.

However, on the whole, the bar is a very welcoming and comfortable place, with accommodating and professional staff, and delicious drinks. The elegance of the venue leans me towards suggesting this is a bar for a date or formal celebration, but it could equally be enjoyed with friends, family, or work colleagues, on pretty much any occasion. 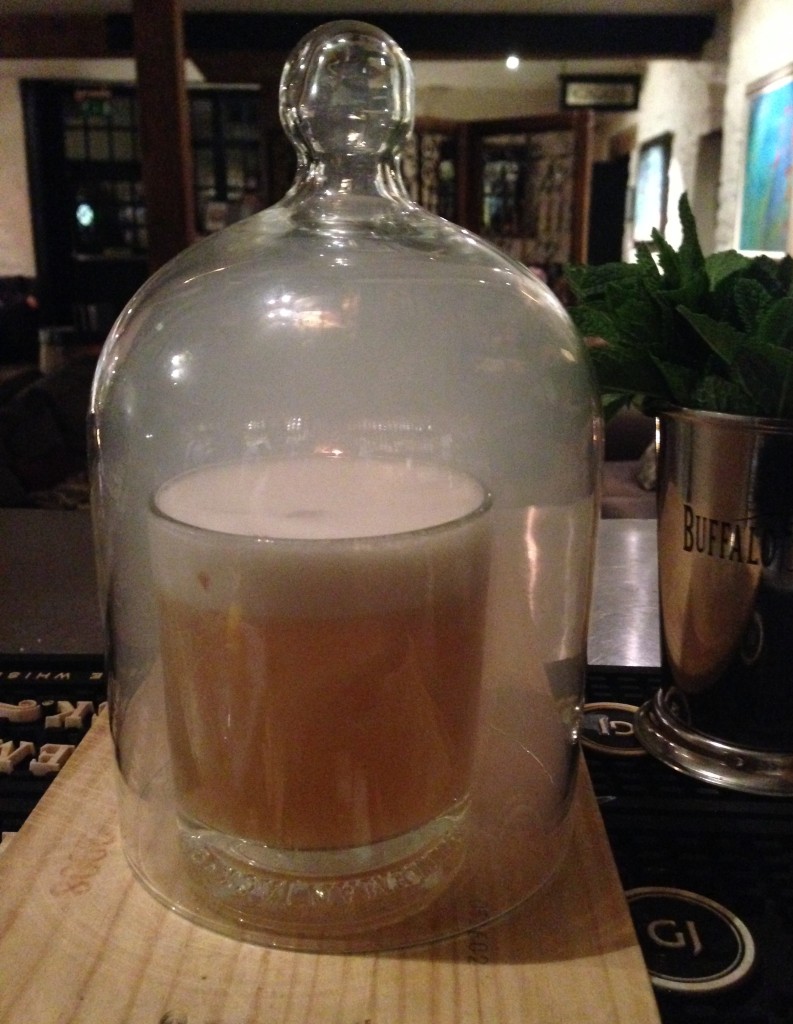