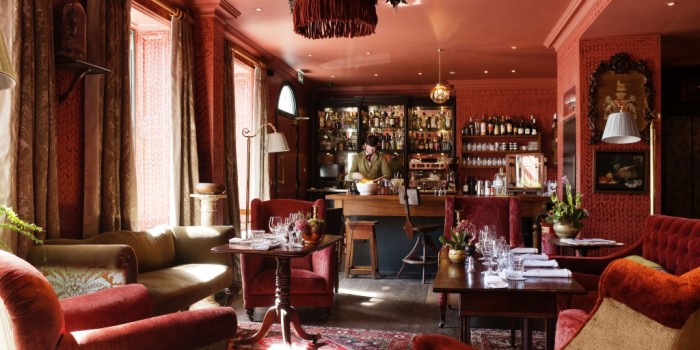 The Zetter Townhouse is located just across the cobbles of St Johns Square from the original Zetter Hotel in London’s trendy Clerkenwell. In stark contrast to the modern retro style of the original hotel, The Zetter Townhouse is like the private home of an eccentric ancestor. The ground floor cocktail lounge is an exciting collaboration between The Zetter, drinks creator, Tony Conigliaro and chef, Bruno Loubet. Stuffed full of oddities and curios, with an open fire crackling in the grate, the relaxed, informal sitting room is equally suited to a lazy afternoon of tea and cakes as it is a night of uproarious revelry. Old recipes for tinctures, perfumes and herbal remedies have inspired not only the cocktails but also the homemade cordials and infusions that sit behind the apothecary style counter. As you step through the anonymous blue door of the elegant georgian townhouse its like stepping in to a wonderful world that time forgot. The Zetter Townhouse was also named London Hotel of the year as there are 13 individual bedrooms above and 2 private dining rooms. For those planning a party to remember The Zetter Townhouse is available to hire exclusively, complete with staff and the keys to the front door! 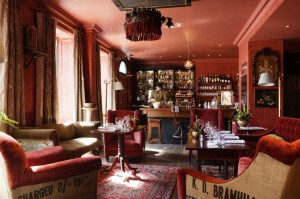 For quite some time 69 Colebrooke Row has been leading the way for bartenders across London.  The creativity of co-owner Tony Conigliaro and his passion for finding new techniques (69 Colebrooke Row houses its own laboratory upstairs) has changed the way bartenders think of adding flavours to drinks. Without sounding like the opening lines to an episode of ‘This is Your Life’, Tony really is a pioneer in the drinks industry and one of its most respected figures.  Alongside his business partner Camille Hobby-Limon he has made 69 Colebrooke Row a bar that is all about the drinks.  If you haven’t been and you find yourself in London, I urge you to look it up.

When I found out last year that Tony and Camille were involved in a project alongside Bruno Loubet to open a cocktail lounge at the Zetter Townhouse (an offshoot from the Zetter Hotel), I was unsure what to expect other than great cocktails. I was fortunate enough to be invited along with The London Cocktail Society to one of its launch nights to get a sneak preview when it first opened. While the décor of the two venues is a million miles apart it is evident that the cocktail lists share the same creators. Homemade syrups, cordials and tinctures are added to 3 or 4 ingredient cocktails.  It’s great to see a cocktail list that isn’t over-complicated where the ingredients speak for themselves. While the cocktail list does change, most of the cocktails I tried on my first visit are still on the list today suggesting an ‘if it ain’t broke, don’t fix it’ mentality.

Décor wise, be prepared for the unexpected. It’s unashamedly Victoriana. Wing back chairs, curiosities including stuffed kangaroos and cats with sun parasols and a table tennis table in the basement all help to make the Zetter Townhouse unlike anywhere else. The Zetter claims to feel like the private residence of a most beloved, eccentric and indulgent aunt.  It certainly does and more to the point she’s an aunt who I’d like to have a drink with because she clearly has some stories to tell based on the items she’s picked up on her travels.

A year after opening, the Zetter feels as individual as it did when it first opened its doors.The service you receive is as you’d expect from the people behind it. Booking is advisable but whether you’ve phoned in advance or not you will be welcomed with a friendly smile by somebody at the door waiting to greet you; it really is like walking into someone’s house. There are some great tables, particularly in front of the fireplace where you can really get comfy for an entire evening of cocktails. Food is available in the form of nibbles and small eats and I would highly recommend them.  The Scotch egg stands out as snack I always tend to order.

Drinks wise, it’s important to remember that it is a cocktail lounge.Wine and bottled beers are available but you’d be a fool not to reach for the cocktail list. The list itself is not huge, only around twelve cocktails but each and every one has been perfected. In my personal opinion, the Pine Needle Gimlet currently on the menu is one of the best drinks I have ever tasted. It is nothing more exotic than a Beefeater Gin Gimlet with home-made pine cordial. On paper its simple, in the glass it’s perfection, perfectly balanced with a totally unique flavour. It’s hellishly cliché to say but it’s like sipping gin in the middle of a forest after a spring rain shower (that’s enough of the cheesy metaphors!). The rest of the list is pretty special too and accommodates most tastes; The Twinkle (Vodka, elderflower cordial and champagne) and the Pomegranate Kir Royal for the sweet tooth, the Somerset Sour (somerset cider brandy, lemon juice, sugar and Breton cider) and The Treaty of 1854 (Kigo, Yuzo juice, lemon juice, sugar and still water) for the sour fans. For the rum lovers, the Master at Arms is one to enjoy. Myers Rum, a port evaporation and homemade grenadine, it seems to be one of the favourite cocktails on the list and for good reason, it’s a Tony C special (only a few ingredients but perfectly balanced).

The bartenders are all professionals so all have great cocktail knowledge. If you want something that isn’t on the list, they will happily make it (as long as they have the ingredients). The waiting staff are all friendly and willing to help as well.  They don’t just ask the obligatory ‘what do you normally drink’ question, they actually take the time to find out what your tastes are. If they can’t help, the bartenders are always prepared to get involved and create something for you. Some bartenders tend to turn their nose up at you if you order a certain drink, but in the Zetter they embrace individuality and don’t seem to judge a man by his cocktail.

Price wise, the Zetter isn’t the most expensive bar in London but you will be paying around £8.50 for a cocktail. That may sound like a lot but you are actually getting an all-round experience as opposed to a half-hearted drink and a stag party for company. The Zetter Townhouse is the sort of place that you could use for a whole host of reasons. I wouldn’t recommend it for a lads night out but you would most certainly impress a date if you took them there. Similarly if you just need a bit of an indulgence with a few friends the Zetter could be just the place to escape the hustle and bustle of London life. 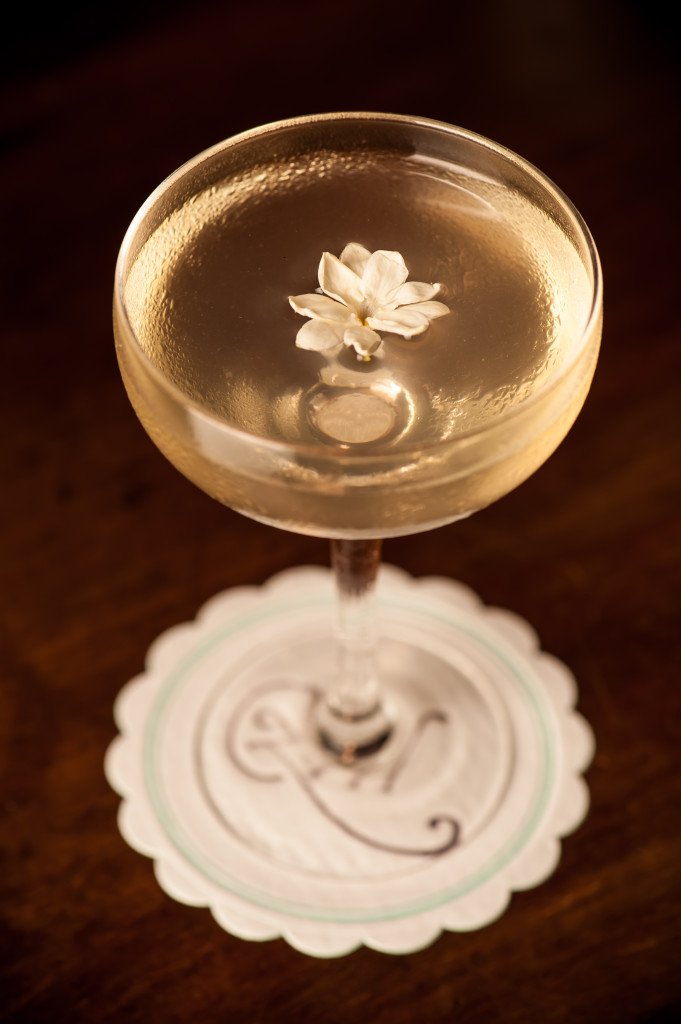