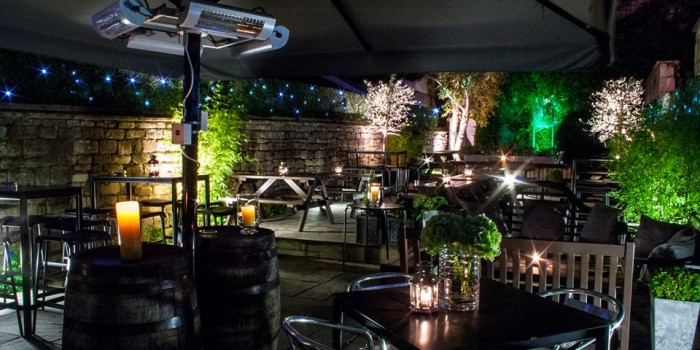 Since opening in 2003, Sub 13 has evolved into the number one, award winning, cocktail destination in Bath. Our aim is perfection in everything we do, from the quality of the drinks we serve to the vibrant atmosphere we create. Situated in what used to be the domestic quarters for the Georgian townhouse above, our bar is a labyrinth of intimate vaults surrounding the main bar area. Handsomely decorated with sweeping leather booths and subdued lighting, we think it’s the perfect place to be, whether it’s for a party or a few quiet drinks. There’s a stunning garden to the rear as well as pavement tables to sit and watch the world go by. And the Champagne lounge is a real hidden gem.

Many of Bath’s bars are underground – it’s like the swan of heritage cities that looks beautiful from above, and has a lot going on beneath. Sub 13 – named from the thirteen steps that lead down to the entrance – is proud of this subterranean location, and give a brief history in their menu. The bar was originally the domestic rooms for the grand house upstairs in the 17th Century, and apparently the superstitious claim to have seen servant-like figures wandering the rooms. Spooky. 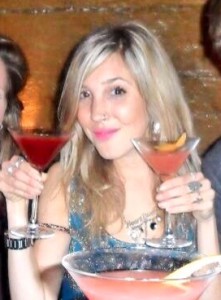 But don’t worry, there are no cobwebs and creaking timbers here – the bar is exceptionally sleek and chic. Candlelight bounces off exposed brick walls and black leather booths, and the vibe is minimal yet elegant. If it were channeling a celebrity, it would put me in mind of a 90’s Sharon Stone with her slicked back hair and sharp white suit. It is gratifying that they have a policy against trashy fancy dress.

That’s not to say I felt bad turning up in jeans and a blazer, but it’s also the kind of place one would feel comfortable in heels and a dress. Casual but cool, I suppose. When you enter, it’s into the tiny, warren like rooms where there’s an option to turn right, towards those movie-star booths and little tables, or left to the bar. It’s small, but feels intimate rather than crowded.

This is the kind of place where the bartenders immediately put you at ease. They look like they know the drill, and are as natural behind a bar as an olive in a dirty martini. Wearing waistcoats and with an air of professionalism, there’s nothing pretentious about it – they’re happy to offer suggestions while also asking about your day.

The menu combines lots of classics with new twists, and comes in a booklet that is thorough but not so vast that it leaves you bamboozled and ordering a wine spritzer in overwhelmed panic. It’s separated into sections that are easy to navigate, the first being ‘Favourites’ that are also on a happy hour. Result. I liked the fact there were icons depicting the glass each came served in, and items included twists on classics like the Vanilla and Passionfruit Caipiroska and the Grapefruit and Lychee Cosmopolitan. There are also Martinis, Manhattans and Daiquiris, but the stars are the Reserve Cocktails.These sum up the Sub 13 attitude to cocktails by using home-made infusions and a nod to the golden-age of cocktails, ‘before they became the disco drinks served by many venues‘. Ouch! With a claim like that, they have to pull it out of the bag, and with concoctions like the Cockatoo, made with 1615 Pisco, mandarin liqueur, Chase Rhubarb, rhubarb bitters and egg white, alongside classics like a Zombie, Mai Tai and Aviation, then there’s a sense that they know what they’re doing.

We perched on the high leather stools, elbows resting on the sleek bar-top as we admired the tools of the trade and the various interesting spirits that winked at us – all reminiscent of a classic bar from the New York heyday. The Pomegranate Blush cocktail stood out to me – it sounded thirst-quenching with its mix of fresh seeds muddled with mint, sugar, Absolut vodka and ginger beer to finish. Plus, served as a long drink, I was hoping I wouldn’t finish it in three sips.

The result was delicious. It was probably one of the nicest cocktails I’ve had in some time – and one of the best looking, with it’s gem-like beads of red fruit cut through with fresh green mint. There was no scrimping on the pomegranate seeds, which gave it the most intense, vibrant taste, and there was just the right amount of ginger beer to compliment it without diluting the flavour. The lime gave it an edge, while the sugar left a delightful taste in my mouth. Despite the fact it came in a tall Collins glass, I found I’d drunk half of it in a matter of minutes. I had a feeling I’d have to start regulating my drinking in this place, or I’d be three sheets to the wind in no time. Still, this didn’t stop me from having a go on my friend’s Pink Margarita. Made with Olmeca Altos Reposado tequila, Cointreau, pressed pink grapefruit juice and a dash of Crème de Cassis, the whole thing looked as good as it tasted – fresh, zingy, and with a bitter edge that made me wince in pleasure. And what was even more impressive was that the barmen didn’t rush. We weren’t waiting ages, but at the same time there was definite care taken when making our drink – they used a straw to test before nodding at the finished result. Later that night I saw the same bartender taste a shaken concoction, furrow his brow, and add a bit more spirit. An attention to detail that is actually quite rare, I find.

We moved into one of the snug booths, getting ready for a night of drinking and chatting in candlelight beneath the curved stone ceiling. The next drink I plumped for was the Grapefruit and Lychee Cosmopolitan. Sometimes lychee can be dangerous in cocktails – too much and you find yourself left with a sickly, syrupy tasting perfume of a drink. But not here. The grapefruit cut through the lychee with delicious intensity. The flavour combination was superb – the alcohol did not overwhelm, but the fresh tartness brought summer to my tongue. Another resounding success, and my friend’s Bath Breakfast ticked all the boxes too. A twist on the Breakfast Martini, this one incorporated marmalade, bramley and gage plum liqueur, home – infused orange Absolut vodka and rhubarb bitters. This host of unusual ingredients was mixed with the skill of a craftsman, and balanced each other out perfectly.

The next cocktail my friend went for was The Jay Gatsby – another inventive combination of Chivas Regal 12YO, Cherry Heering, Lillet Rouge aperitif and pressed apple juice. I gave it a taste and this is where I knew without doubt Sub 13 are professionals. I’m not a whisky fan, and while this cocktail didn’t mask the spirit, it was so cleverly supported by the other additions that I could really appreciate what a fine drink it was. I had a Chocolate Orange Martini to finish, tempted by the fact it promised a dessert-style sweetness without any heavy cream or milk. And you know what? It was like a chocolate orange had exploded on my taste buds. Heaven.

It’s no surprise that Sub 13 won the award for Bath’s Best Cocktail Bar in 2014, and if you want to learn mixology like a pro then they offer masterclasses, too. But it’s not just the expertly made cocktails that are a draw. In an even lower vault, there is a very fancy Perrier-Jouët Lounge (this time with white upholstered seats – Ms Stone would definitely approve), and there’s also a garden for those balmy summer evenings. Plus, as well as the incredible happy hour, this is also one of the few late night bars in Bath, opening until 3am on Saturdays. Be warned though – if there’s not enough seating to go round then you will find yourself standing for a large portion of the night.

This is a bar sure to become a favourite haunt, whether enjoying cocktails over a lengthily catch up with friends, on an intimate date, or with a group looking for a trendy, tasteful and tasty evening out. It’s evidently a prime spot to head in Bath, and has a buzzing atmosphere with a sense of style that is as top notch as the standard of drinks and service.