The Sidecar cocktail ~ a Quick Guide 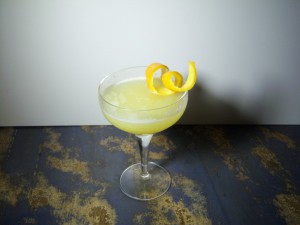 The Sidecar cocktail is a classic cocktail dating back some 100 years and is a cocktail with brandy (or Cognac), orange liqueur and lemon juice. The cocktail has a wonderful golden straw colour with the high notes of the citrus working perfectly against the steady bass of the brandy. The drink was particularly popular in England and France, where legendary drinkers such as Ernest Hemingway would sip the Sidecar cocktail at the bar. Over the last decade the cocktail has seen a big rise in popularity, making a resurgence on contemporary bar menus across the UK and Europe.

The Sidecar cocktail is closely related to another cocktail with brandy, the Brandy Daisy, in which yellow Chartreuse, grenadine syrup or another sweetener often replace the orange liqueur of the the Sidecar cocktail. In the White Lady cocktail, gin replaces the brandy base  of the Sidecar and in the Jack Rose drink applejack is used instead of the brandy and grenadine syrup replaces the orange liqueur.

The exact origins of the Sidecar cocktail are debated, but the general consensus is that the classic cocktail was first created at the end of World War 1 in either London or Paris. To this day, the Ritz Hotel in Paris take credit for the drink. The very first recipes for the Sidecar appear in 1922, in Harry MacElhone`s Harry`s ABC of Mixing Cocktails and in 1948 it is one of the six basic drinks listed in David A Embury`s The Fine Art of Mixing Drinks. In this book the author credits the invention of the drink to an American Army captain in Paris during WWI.

Legend goes that the drink was named after the motorcycle sidecar “in which the good captain was driven to and from the little bistro where the drink was born and christened”. The “little bistro” in question was Harry`s Bar in Paris which is often popularly credited as the birthplace of the classic cocktail. The story continues that the mix of ingredients was first blended when the army captain asked for a pre-dinner cocktail that would help warm him up from the chill he had encountered outside. He knew brandy would be the best liqueur to take away the chill, but he did not want to serve the traditional after dinner drink alone as a pre-dinner cocktail. As a result, the bartender mixed brandy with the orange flavoured Cointreau liqueur and added fresh lemon juice to make an appropriate pre-dinner cocktail with brandy and hence the Sidecar was born.

How to make a SideCar Cocktail

The “Spanish Daisy” ~ the Margarita Cocktail