In a city such as London, the next best thing comes along every five minutes. Today’s ‘new favourite’ is tomorrow’s ‘who was that again?’. Bars come, bars go, some stick around, but few claim their stake at the top table and refuse to let go. This is those few. 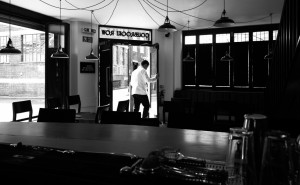 Having just celebrated their 5th birthday, the Bar With No Name can lay claim to having been one of the very first to introduce the idea of doing weird things to booze. The lab, originally on the first floor of the bar but now a few streets away in an old recording studio, is where many of the ingredients for the signature understated style of cocktails are produced. From flint vodka to olive water and distilled clay, this bar takes the unusual and turns it into a clever, stylish and reliably well-executed cocktail. Intimate and classy, 69 Colebrooke Row has frequently inspired, but never outshone.

Daintiness is a theme here, from the almost Japanese-style seating arrangements, to the bar and the drinks themselves; there is a elegance to the set up that belies a faultless attention to detail. Despite the reputation for using ‘molecular’ techniques, few of the drinks reveal the complexity of lab work that is often behind them. The science is used to enhance the experience, not dominate it. The result is a style of cocktail that will outlive the fashion for faffy mixology. This bar is class through and through. 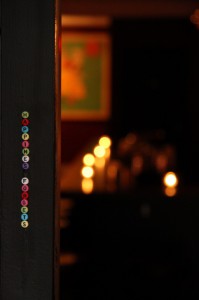 You can’t help but approve of a bar that includes the rule “no wallies allowed” on it’s menu. Despite being located in Shoreditch, somehow they manage to uphold their standards, and this is one of the most magical vibes in the city; whether you visit in a group or pop in for a quick on your own, you can’t help but leave feeling like the world is better than you entered. The cocktail menu is a short no-nonsense affair that packs flavour tighter into your glass than you’d think possible.

The half-reserved, half walk-in policy for tables is delightfully utilitarian in its approach.Prime location is perched at the bar, squeezed in amongst a crowd of friendly drinking compatriots. Living near here would prove very dangerous indeed, likely resulting in you having ‘your’ stool and glass, for there is not a day or occasion where a visit would be inappropriate.

For timeless glamour and refined cocktails, you can’t beat the big sister to the equally swell Beaufort Bar. Lavish and elegant, as so should be in such an esteemed location. The name itself comes from the style as was in the late 19th/early 20th century for serving drinks ‘American’ style. The bar itself has a history of legendary head bartenders, which makes today’s maintenance of exemplary standards all the more impressive; the fall from grace would be a painful one.

Nibbling on moorish bar snacks whilst listening to some nimble-fingered chap on the piano makes it all the more easy to forget you’re about to pay premium prices for cocktails often made with run of the mill spirits. When they are served with such aplomb in fine glassware and diligently served by a not-at-all snooty table service, the opulent surroundings more than make up for it. The expected classics and historical references in the menu are kept nag up to date with takes on contemporary styles, making this bar a must-visit destination whatever your palate preferences. 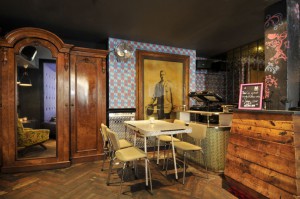 Another big name in the world-wide, let along London cocktail scene.  Kitsch Lewis Carroll Jaberwocky-inspired decor downstairs complete with hidden back bar courtesy of a wardrobe deliver frolics-abound.  Early week gossiping and weekend partying are the specialties of the ground-floor front and lounge bars, both of which serve up creative, fun and devilishly delicious cocktails listed on much-lauded award-winning inspired design menus.  From cassette tapes to tube maps and everything in between, you’ll not find a menu more tempting to thieve.

Upstairs is a third and altogether more intimate bar, famous for its regular reinventions as everything from a members club, to a summer festival venue.  The more personal service made possible via the reduced guest to bartender ratio offers a different twist to the Callooh Callay experience, whilst the presence of slushy machines ensures that the vibe never ventures too close to serious.  A visit here is a bit like a trip to the mad-hatters tea party; if the mad hatter was an insanely talented bartender that is.

The bar above Social Eating House is just one part of Jason Atherton’s expanding empire, and yet it has rapidly established itself a reputation for being a leading bar in its own right. Pun-laden, out of the box drinks are giggle-inducing by name, and nod-with-approval inducing by taste. The well-proportioned and smartly appointed bar (everyone loves a copper bar top) is tended by a team who embrace the old-school charm approach whilst serving up what will no doubt often become contemporary classics.

Bags, boxes, cartons, bottles and everything in between are offered up as drinking receptacles, presumably at the horror of the poor soul that has to prep the things. Notable in reading the menu here is how few ingredients are repeated. An understandable efficiency technique in many bars, is taken right to the other polar extreme, truly delivering a menu where ‘one of everything’ is a tempting prospect.