Belfast Cocktail Bars have slowly but surely been making a impressive name for themselves, with the launch of some outstanding cocktail bars such as Love & Death Inc, SHUBAR and Lily`s over the last decade. Belfast is also home to The Bar at the Merchant Hotel which is widely regarded as serving some of the most consistently excellent cocktails in Belfast and in the whole of UK. Furthermore, this bar was, until recently, famous for having on its menu the most Expensive Cocktail in the World, a Mai Tai, which would set you back a mouth watering £750. This record was recently toppled by Salvatore Calabrese at the Playboy Club in London. 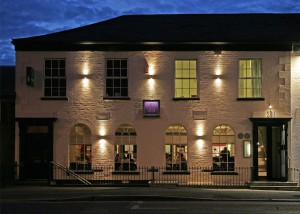 To help get a better understanding of the current “buzz” about cocktails in Belfast, we spoke to a few  industry experts in the city. Firstly, we had a chat with Alan Reid, manager at SHUBAR, an intimate cocktail bar located in the basement of Shu Restaurant, which is itself regarded by many as one of  the best eating establishments in the capital. We asked Alan who he considered the key players steering Belfast Cocktail Bars over the last several years.

The Belfast cocktail scene has been driven by a few key players who had the necessary foresight and skills to get it off the ground originally. Morgan Watson (Apartment) immediately comes to mind. Pauric “the doctor” Duffy (ex Quaglino’s, Che and the Dorchester) played that role when SHU launched. SHUBAR gave Belfast Pauric and Pauric (before he went state side) gave a generation of Belfast bartenders an education in the art of cocktail making.

Next we asked Alan what he thought of the current Belfast Cocktail Bars scene.

Considering that the cocktail scene was more “Del-boy” than “delicious and desirable” until about 15 years ago I think we have a vibrant vibe, in what is after all a small city.

Finally, we asked Alan if he thought “Cocktail Culture” in Northern Ireland would remain centralized in Belfast or spread to other parts of the province?

If cocktails make the cross-over into more traditional city venues they can make the transition to country bars!

Next we caught up with Chris Kilpatrick from Claudines Cocktail Bar, which is part of Queens Boutique Hotel situated on University Street. We asked Chris what he believes Claudines has brought to cocktails in Belfast.

It brings a relaxed environment to try all types of cocktails, from the classics such as the Daiquiri, to our bespoke creations such as the Sunset Kiss.

When asked about the Belfast cocktail scene in general Chris said.

I think the scene could do with a bit more promotion if it intends to really grow. Currently, it remains more of a novelty than anything else. 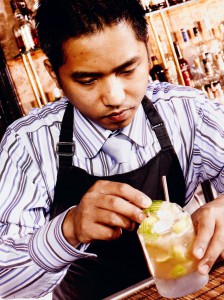 Next stop, we spoke to Beverley Crockyard who is part of the Marketing team at The Merchant Hotel, one of the top luxury hotels in Ireland and widely lauded for its superior & inventive cocktail menu.

To begin with, we were keen to find out how The Bar at The Merchant Hotel has become, not just a benchmark for all Belfast cocktail bars, but also a world leader with its standard of cocktails, both in terms of quality & innovation.

We have an uncompromising approach towards every element of our cocktail making in The Bar at The Merchant Hotel. Everything from our ice procedures, when crafting our hand-cut ice, to our juices squeezed by hand, fresh, each morning. Not to mention the carefully selected chilled glassware and our beautifully delicate garnishes for each cocktail. These, along with our excellent award winning Cocktail Menu and our sumptuous setting make The Bar at The Merchant Hotel one of the best in its class.

Next, we were curious to find out which cocktails had proven consistently popular for Belfast cocktail lovers:

The Penicillin (a firm favorite amongst our male customers) a delicious mix of smokey whisky, honey, lemon juice and fresh ginger extract.

The Clover Club which shakes gin with fresh raspberries, vermouth, house made raspberry cordial, lemon juice and a dash of egg white.

Of course our Mojito, Bramble and Cosmopolitan all remain regular bar calls.

Finally, I asked Beverley whether she felt Cocktail Culture in Northern Ireland would “begin and end” in Belfast or whether it might spread to other parts of the province:

I think basic Cocktail Culture has already started to off shoot into other areas outside Belfast due to demand from customers coming back from weekends in Belfast and further afield. However I believe that for consistency, balance and innovative ideas involving drinks, Belfast will always remain ahead of the pack.

Most Expensive Cocktail in the World

Feb Poll: What is the best Cocktail City in the UK (ex London) ?