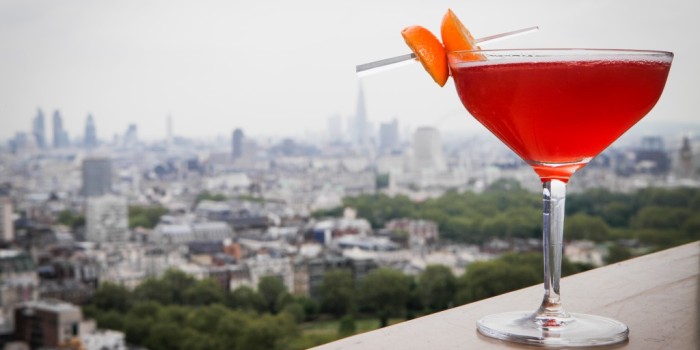 Michelin-starred Galvin at Windows restaurant and bar has become one of the most talked about destinations since opening in May 2006. Situated on the 28th floor of the London Hilton on Park Lane, it has become renowned for its peerless views over the capital. Try a signature cocktail – made from only the fines ingredients. And for those looking for something a little stronger the whiskey collection is sure to tempt you. If you’re feeling a little hungry then there’s also a great express lunch menu and canapé selection for those looking for a quick bite.

They might often be cosy affairs, perfect for hunkering down on a cold winters night, but London’s penchant for subterranean cocktail bars does mean that you are left relying on the aesthetic appeal of your compatriots, or the skills of the interior designer for ocular satisfaction. When however you happen to have a 28 floor hotel overlooking some of London’s most gaze-worthy attractions at your disposal, it does seem daft not to put you bar right at the very top. So top marks to the London Hilton for an impressive display of common sense. 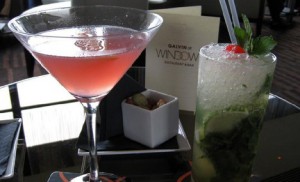 Fortunately, the inclusion of some rather speedy elevators ensures that the potential for unacceptable delays to your drinking are minimised, and in a matter of seconds you’ll find yourself enjoying some of the very best views the Capital has to offer. Surrounded by a palette of silver and gold in the obligatory art deco style of too many hotels, guests are treated to views that the London Eye would die to offer. The result is that the majority of this bars visitors have had to remove a bum bag from around their waist, and an SLR from around their neck as part of the evenings preparations. These adornments have been replaced with some proverbial rose tinted spectacles such that your arrival is marked by a cacophony of oohs and aaahs as they absorb the visual spectacle of the night-time cityscape.

Presumably few people stay seated long enough to notice, but a combination of the need to face guests towards one or other of the two opposing walls with views together with the borrower-like proportions of some of the buttock rests creates a distinct feeling that one is participating in a surreal game of musical chairs. Apathetic service and a bar that guests aren’t allowed anywhere near work together to ensure that by the time your drink comes your thinking that the London Eye probably was the better option.

The cocktail menu proposes to be of the proper kind that appeals to those in the know rather than the jovial but ignorant tourist crowd.  For the most part it does so with great success. The “No News” demonstrated an understanding of flavour profiles with its gin base topped with orange and apricot notes. “The Dutch” meanwhile was a brave and bold mix of Genever, horseradish, agave syrup and cucumber, with the resulting flavour being a complex and highly unusual sweet-sour tongue tingler. This is a drink to both challenge and tantalise the palate. Many visitors will have dined in the restaurant next door and thus the ‘sweet and full-bodied’ section will undoubtedly be a hit, particularly when drinks such as the “Indulgence” with its blend of Yamasaki whiskey, Mandarin Napoleon and Cacao liqueur are on offer.

And so confusion reigns in the return trip on the express elevator. Views, great. Cocktails, great.  Everything else, meh.  Perhaps they just forgot that a bar is about more than a feast for the eyes and palate, or perhaps I just don’t like people that wear bum-bags.