Bond No. 9 is a relaxed, award winning, cocktail lounge bar and kitchen in the Shore area of Leith.With a focus on fresh ingredients both in the kitchen and on the bar as well as Scotland’s largest selection of Absinthe, served in the traditional style, Bond No 9 offers something truly unique. The offering changes with the seasons but our bar squires are keen to try their hand at any drink we have the ingredients for, and we have a lot of ingredients…

In the misty corners of my memory, I seem to remember cocktails being A Really Glamorous Thing. Probably when I was supping cider and blackcurrant at the local student union, and the thought of paying more than £3 for a drink made my head spin. However, whether it was my youthful prejudices (and bank balance) or not, the last ten years has seen cocktailing undergo something of a democratisation – possibly a bit of a poncy word for a review, but the point is – cocktails are now, well, kind of everywhere. And sometimes, they get a bit samey. So when I heard that Leith’s Bond no 9, snuggled down on Commercial Quay, added a twist to the increasingly well-worn tale, I was interested to find out more.

The twist, it turns out, is green and comes with a flirtatious flutter of fairy wings – for whilst Bond No. 9 isn’t a dedicated absinthe bar, the “Green Fairy” liquor features in a fair few items on a short but interesting menu. It also sets the theme for the venue nicely – bohemian Montmartre* *drinking den, with sketchy murals of nineteenth-century Paris,vintage posters and a champagne-bottle strewn fireplace, but given a luxe-modern face-lift by leather couches, snazzy wallpaper, and a magenta-lit bar.

So I was certainly impressed to see the famed and feared spirit incorporated adventurously into a number of recipes. I especially liked the sound of the “Red Fairy“, which combined fraise de bois, elderflower liqueur, cranberry, lemon and of course absinthe into a perfectly decadent tipple, but it’s also available in the traditional La Louche style (with iced water and sugar), among others.

Alas, with work the next day, I thought it was best not to be tempted by minxy wiles of *La Fée Verte*, delicately treated though I’m sure it would have been, and instead opted for more familiar but no less indulgent alternative. The excellently-named “Airships Don’t Fly” was my choice: Calvados, grapefruit, lemon and sugar, topped off with champagne.
Looks-wise, it was a highly accomplished affair: pale pink and embellished fabulously with a fan of apple slices.It also ticked the taste boxes with a flourish – the sharp citruses contrasting nicely with the sweet and apply Calvados, and brought together with the gentle tongue-tingle of that champagne.Importantly, the dose of bubbles was generous without overwhelming the cocktail’s other flavours – no skimping on the good stuff – so even though this was a short drink, I felt I got excellent value for money.

My friend Katey’s cocktail, the “Calvados and Hobbes“, mixed Calvados, lavender syrup, lemon and apple into a longer drink that arrived tinkling with ice cubes, laden with apple and crowned with a deliciously foamy topping. This was summery and refreshing, a sort of naughty fruit juice, with just a whisper of fragrant lavender – an unusual and welcome addition that added an extra note of interest to the offering.

Bond no. 9’s home of Leith is known increasingly, and deservedly, as home to some of Edinburgh’s best foodie and drinkie gems – and after my all-too-brief visit, I’m happy to confirm that Bond no. 9 is certainly one of them. A sparkling emerald the Green Fairy herself would be proud of. 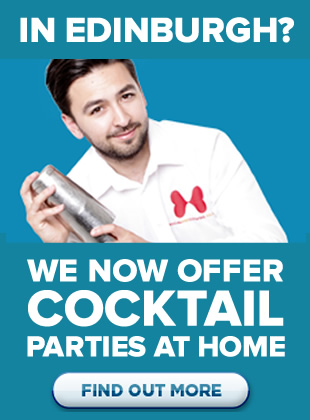