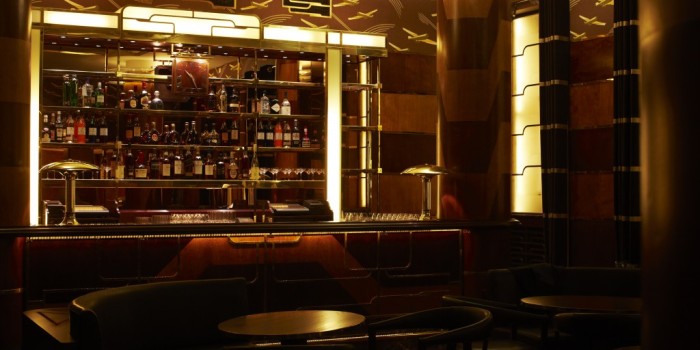 It is one of the enduring pleasures of London living that every now and then you come across something to bring an unexpected smile of surprise to your face. Particularly pleasing is that my latest such experience took place just a few yards from the horror that is Piccadilly Circus. Head north onto Sherwood Street and you’ll soon come across an innocent and not particularly startling brasserie place where only the magpie-eyed will notice the unassuming advertisement for it’s other two attractions, the bar and cabaret. It is not until you have descended the large winding staircase to the basement, that the full glory of this venue is revealed. It’s as though you have stepped back in time, and into the grand lobby of a theatre complete with a dominating chandelier and art deco wall murals.

With the cloakroom, brasserie and cabaret leading off at various o’clocks, it is the direction of noon that those in need of some liquid refreshment will need to head. Sure enough, there is enough art-deco detailing, bronze and wood in here to please even the most enthusiastic Napierite. It’s good-looking all right, one of the best in town. Which makes the decidedly average cocktails all the more frustrating.

The list of six classic and six house cocktails is a good start, offering something for everyone without causing you to become flummoxed with choice. The house cocktails even sound pretty promising; who wouldn’t want to try the ZL Cobbler with its mix of calvados, Byrrh, apple juice, cardamom and vanilla. The trouble is, they don’t seem to be able to get it quite right in the delivery. Things made a bad start when my Old Fashioned which promised rye whiskey on the menu was in fact made with Maker’s Mark bourbon despite there clearly being a bottle of rye on the back shelf, and that was before the bartender proceeded to use ice wetter than a beaver’s pocket to stir the pour liquor until the finished drink was almost homeopathic in intensity. Things weren’t quite so bad with the citrus-heavy Aviation and too-peachy No. 20 (rhum, orange Cracow, creme de peche, lime, honey and egg white), but never did the bar run the risk of becoming a regular stop off on the way to the circus.

Many disappointing bars are simply badly conceived; this isn’t  it’s badly executed. Hopefully a little more training will see them up their game, for a nice bar is just what Piccadilly Circus needs.