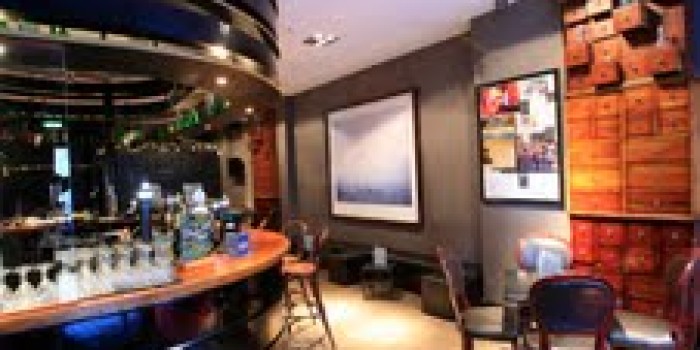 Apotheca bar opened in Manchester city centre, UK in November 2008 and is situated in a listed building in the creative Northern Quarter district. The name comes from the antique pharmacy cabinets, which grace the front bar that were originally used to provide medicinal relief in the form of a remedy. These apothecary draws are now home to a variety of distilled tinctures and elixirs once again providing a cure in perhaps a more sociable setting. A mixture of ella and meta embossed high stools surround the bar and classic Queen Anne chairs are drawn up to elegant solid bistro tables. Black leather sofa’s are situated neatly in each bay window and also fit snugly at the back of the room a great place to sit and contemplate the huge photographic artwork. Awards for Apotheca; Winner of MFDF Best Bar 2009, Best Cocktails in Town 2010 – Winner of City Life Awards. Apotheca; great music, great drinks, great times.

Apotheca, from the archaic term apothecary, means ‘one that prepares and sells drugs and other medicines; a pharmacist’.  Whilst I’m sure the staff at Apotheca would never refer to themselves as, er, drug sellers, I have it on good authority that all of their libations are medicinal. (Y’know, like painkillers: they make you feel really good for a while, and when they wear off, you feel awful).

This place is a stalwart of the Northern Quarter scene, despite its relative youthfulness when compared to its older neighbours. Its unassuming and dark exterior – somewhat reminiscent of corrugated iron – combined with its friendly and knowledgeable staff have ensured that Apotheca remains a popular choice with Northern Quarter devotees.

Although it might not be the most obvious place to grab a cocktail, it’s a bar renowned for having a team dedicated to the art of mixology. Manager Charlene Holt previously won the ‘Asahi Rising Star Cocktail Competition’ – among other awards – and has evidently passed on her enthusiasm to the rest of the team. The cocktail list is extensive and one of the bartenders informed me that most of the staff have a signature drink on the menu. 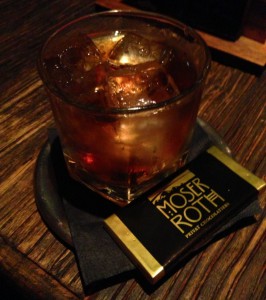 If you manage to make it past the first couple of pages of the menu, you’ll spot their week-long cocktail deals (perhaps this explains their popularity!): many are offered at a bargain price of two for £9, making Apotheca one of the more affordable venues in this part of town. Not usually one to resist a bargain, I found their more expensive, ‘twisted classics’ cocktails even harder to resist, and started the evening with a Salted Caramel & Orange Rum Old Fashioned (£9). Posh rum, Ron Zacapa, is stirred down with salted caramel syrup and orange bitters, and served with a dark chocolate ‘garnish’. This was definitely one of the most easy-drinking Old Fashioneds I’ve – hic! – had the pleasure to try, though I would have liked a stronger hit of the salted caramel: it was lost in the sweetness of the rum.

Jamie opted for Apotheca’s Martinez (£7.50). What makes this drink a little different from the norm is that the traditionally used Genever (sort of like a Dutch gin) is replaced with the oh-so-British Martin Miller’s. Their attention to using high quality spirits such as this warrants the slightly steeper price tag. If you’re not quite ready to handle the full-on Vera Lynn of a traditional dry Martini, then the Martinez will ease you on the path to (mother’s) ruin: mixed with sweet Vermouth, Cointreau and bitters, the additional ingredients help take the edge off. 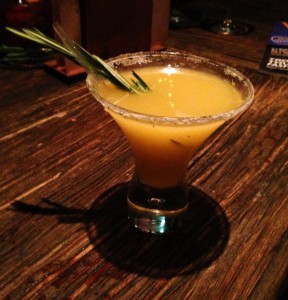 We were intrigued by the Rosemary & Mango Margarita (£8), although I later wish we hadn’t been. Whilst the drink looked beautiful, we couldn’t get away from the overpowering flavour of the herb; when combined with the lemon salt rim, it just felt a bit like we were eating a roast dinner, but without the lamb. 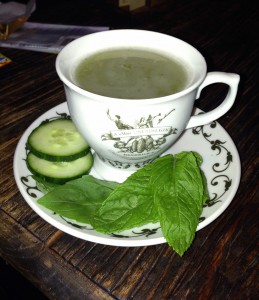 Moving swiftly on, An English Country Garden (£7), was a refreshing and – honestly – totally down-able affair. A modern classic, Hendricks is mixed with St Germain elderflower liqueur (always a winning combination, in my book), cucumber, basil, mint, lime and apple juice. Perhaps better suited to a summer’s afternoon than a cold Manchester night, this was still thoroughly enjoyed.

To finish the night off, we turned back to the classics page and Jamie opted for an Aviation (£7.50) made with Portobello Road gin, violet liqueur, Maraschino, lemon juice and grapefruit bitters. A cocktail that has wallowed in obscurity for much of its life since it was created way back in 1911. Over a hundred years on, Apotheca revives the original recipe, including the once hard to source violet liqueur. If you gorged on Parma Violets as a child, this is the drink for you.

My final libation of the night was another whiskey classic hijacked by its Dominican Republic cousin (Brugal Extra Viejo), an Aged Rum Manhattan (£8). Well-balanced and softer than a traditional rye Manhattan, it was the perfect end of the night drink. Using rum for this classic cocktail made it a little too easy to knock back, so be careful if you start your night on these!

In an area of town over saturated with ‘cool kids’ dying to queue for sub-standard food and drinks, Apotheca is a relaxed and unpretentious haven, offering well-made drinks at reasonable prices.