Pepper Vodka is a spicy, fiery vodka which has become increasingly popular with bartenders and drinks enthusiasts over the last few years. Pepper vodka is widely used to creat savoury-style cocktails that have emerged in certain UK Cocktail bars – particularly meat-based cocktails. Pepper vodka tends to be flavoured with capsicum and the oils of Jalapeno Peppers. Pepper vodka is perfect for making the classic spicy cocktail – the Bloody Mary, which saves the bartender having to add pepper into the mix, which is usually standard practice.

Although spicy, the major brands of pepper vodka do not tend to be overly fiery and hence are perfect if you want to spice up certain vodka cocktails with the pepper variety replacing the normal brand. One cocktail you could try, if you are feeling adventurous, is the Hot and Dirty Martini, which calls for pepper vodka, dry vermouth and just a dash of olive juice.

With the latest trend of creating infused vodkas at home, pepper vodka has gained more and more prominence. One of the more popular recipes for peppervodka involves adding several peppercorns to vodka and allowing to sit for about a week, or longer if you fancy a more intensive flavour.  If you decide to make your own pepper vodka make sure you stir or gently shake to combine the ingredients every couple of days. Some people even add a clove of garlic, or other herbs and spices, to the infusion for that extra level of flavour and complexity. 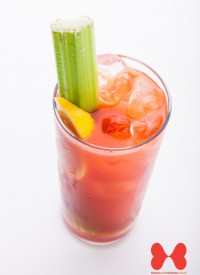