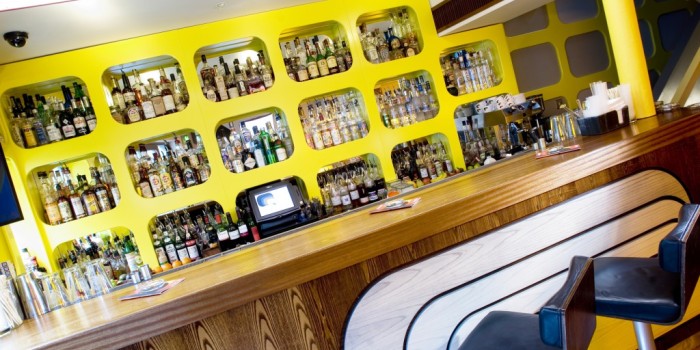 We are a small intimate bar with the emphasis being on high quality drinks and service but without being too formal. We feel going out for a drink should be a relaxing experience. We firmly believe that everything inside the cockail glass should be serious and everything outside the glass should be fun! We only employ full time passionate professional bartenders who ooze with a genuine love for what they do.

Upon entering Raoul’s it’s obvious this is a bar serious about their cocktail making. On the wall hang certificates about the various awards they’ve won, and the back-bar offers a shimmering multi-coloured plethora of spirits. Their ingredients are a cause for interest – various exotic fruits (they claim to use more fresh fruit than any other bar in Oxford), as well as marshmallows, maple syrup, nettle cordial…. and they also make their own syrups and bitters. So, pretty professional. 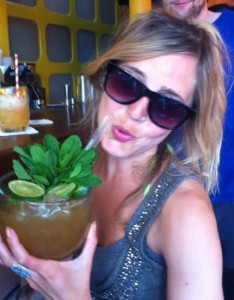 Located in Jericho, Oxford’s ‘cool and trendy’ part of town and off the main drag, Raoul’s obviously attracts student types and those wanting to let their hair down. It’s not huge, and can get pretty cramped on weekend nights – there’s a downstairs sitting area and a little hub on the stairs, but it’s much more fun to be in amongst the action.

But the real thing to talk about here are the cocktails, because it may take some time to get through even a fraction of the list. This is a place that excels in drinks of the mixed variety, and has a multi-paged menu to peruse. The result can be a bit overwhelming on your first try, but after a few visits then one gets into the swing.

It’s made easier by the fact you can see a picture of the type of glass your tipple arrives in, and pages are headed to aid and inspire – from ‘Flips, Nogs and Sours‘ to ‘All Stars‘; ‘Fancy Drinks’ to ‘Blighty‘ – assumedly a nod to fair England.

Drinks envy might pervade here, so I linger at the bar to see what others have. And watching the staff at work is certainly an education – they’re ridiculously efficient, while evidently making quality cocktails. I see one girl order a drink in an old-fashioned champagne glass that has sugar sprinkled on top and is then finished with a blow-torch – it’s called a Bourbon Brûlée. Not strictly a fan of the dark spirit, I still have to try it. It uses Wild Turkey 81, caramel liquor and egg white. It’s delicious – smooth, decadent, not too sweet, and almost a dessert in a cocktail. The hardened sugar-coating is addictive. I try some of my friend’s bright red Clover Club which incorporates gin, raspberry jam and fresh raspberries – it’s tasty, but the jam makes it a bit too sickly for my palate. I love the fruitiness of it though.

Next I go for something I hope will be a bit more refreshing – a Mango and Lychee Collins that arrives in a tall glass and is decorated with a Carmen Miranda array of that fresh fruit. They’ve blended it up so that’s its like an exotic slushie, and is such a burst of flavour that I can hardly taste the vodka. Dangerous. My accomplice chooses from the ‘Chiki Tiki Homepage‘, and this time I am envious. She has a Nana-Nutty Colada – Appleton rum, Frangelico (which I go wild for), coconut cream, pineapple juice and a whole blended banana. It’s white, smooth, intensely creamy and with a pang of coconut that transports me to a Caribbean beach. It also comes with half a banana hanging off the side. I can almost hear the steel drums.

Next I try something really adventurous – it’s served in a tin can and heated over some sort of Bunsen Burner apparatus. Things just got scientific, y’all. It’s called a Bristol Blazer, from the Blighty page (natch), and is Somerset Cider Brandy heated with apple juice, fresh berries and cinnamon. It’s odd drinking a hot cocktail, and initially I feel like I should be wandering a Christmas Market, but it’s lovely, warming me from the inside with spice. I also have a taste of my friend’s Rum and Raisin Old Fashioned; something I’m not usually crazy for. This is another great surprise – the heavy tumbler includes muddled raisins, and a cinnamon stick to swirl the flavours. It makes for great drinking.

Raoul’s is perfect if you fancy stepping outside the cocktail norm to try some intriguing ingredients (quince jelly, pear puree, port, homemade sherbet…) or just some unusual concepts – on the menu I spotted House Navy Grog, Big Bold Eggnog, George’s Marvellous Medicine and Gigglejuice among several others I was desperate to taste.

If Willy Wonka branched out into liquor and opened a mixology factory, then this would be the result. Coming here is so much fun that it’s a must visit for cocktail fans. You’ll be determined to make your way through the extensive and sometimes barmy list, and will have as much fun admiring what other people have as ordering for yourself. It’s far too easy to spend a night here, although the cocktails aren’t wildly pricey so you shouldn’t bankrupt yourself. Come with an open mind and soak up the atmosphere and the amazing flavours that Raoul’s has perfected.