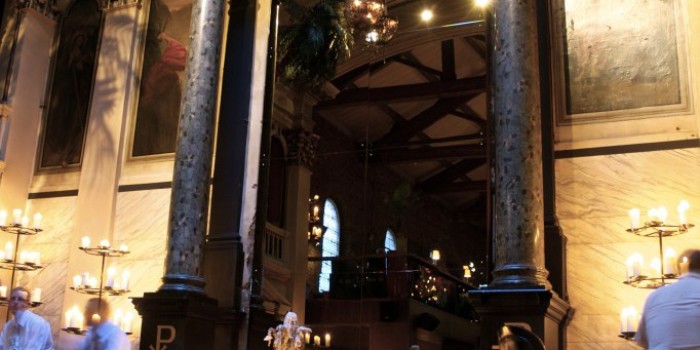 Alma de Cuba, Liverpool’s most spectacular restaurant and bar; an island in the heart of the city, an independent spirit that leaves a lasting impression. Set inside the magnificent conversion of the former St. Peter’s Catholic church, Alma de Cuba is an eclectic mix of Cuban, Hispanic and Latin American influences that are enhanced with Liverpool’s great spirit.

Come and enjoy a quality of service that matches the splendor of the award winning interior.

Since its opening in 2005, Alma de Cuba (Seel Street, Liverpool) has become a staple of the central Liverpool bar scene. Set inside the converted Saint Peter’s Catholic Church, the Grade-II listed building dates from the 1700`s and the exterior appears almost unchanged, with the minor exception of a small terrace built to one side. Upon entering the bar, you are immediately struck by the beauty and scale of the interior, with towering pillars, huge chandeliers and a mezzanine allowing unobstructed views of the soaring ceiling. The décor is a combination of modern luxury and Latin American flair, expertly blended with the beautiful features of the old Church. Stained glass, religious icons and the original altar are all left intact, with low lighting and plenty of candles helping to produce a deliciously sacrilegious brand of style, easily securing the title of most visually stunning bar in Liverpool.

Alma draws a varied crowd with its mix of bar, restaurant and live musical events. During the week, couples and restaurant-goers enjoying a pre-dinner cocktail are a common sight, but at the weekend a strict dress code is enforced and the bar packed with those who wish to see and be seen.

At 11pm on Friday and Saturday nights the Latin American theme is brought to the fore, with live Samba dancers, music from resident DJ`s and thousands of rose petals dropped from the mezzanine to create a real carnival atmosphere. While this spectacle is not to be missed it is also extremely popular, meaning the bar gets very busy around this time and the wait to get served can be frustrating, so arrive early, grab a cocktail and enjoy the show.

Bar staff are knowledgeable, friendly and consistent, although can often be overwhelmed on busier evenings, so don’t expect any flair mixing if you go on a Saturday. The cocktail menu draws inspiration from South American and the Caribbean, with rum featuring heavily. There is also an emphasis on homemade infusions and flavoured gommes, used in both their signature drinks and to add a twist to well known classics (e.g. a Manhattan with coffee and cinnamon gomme). Alma’s version of the Mai Tai (Appletons VX Jamaican Rum, Skippers Demerera Rum, Velvet Falernum, orgeat almond syrup, grenadine, lime, orange and pineapple) is particularly good, with a perfect blend of rum, fruit and mellow almond flavours, or try the “Rainbow Punch” (Santa Teresa Gran Reserva Rum, banana liqueur, Grand Marnier, passions fruit and chilli gomme, grenadine and pineapple juice) for a real taste of the tropics with a little chilli kick to add an extra twist.

All cocktails on offer are well made, featuring high-end spirits and some interesting twists thanks to Alma’s signature flavoured gommes. A great party destination on a weekend, but arrive early and beat the crowd if you prefer to simply enjoy a drink in a truly fantastic setting.